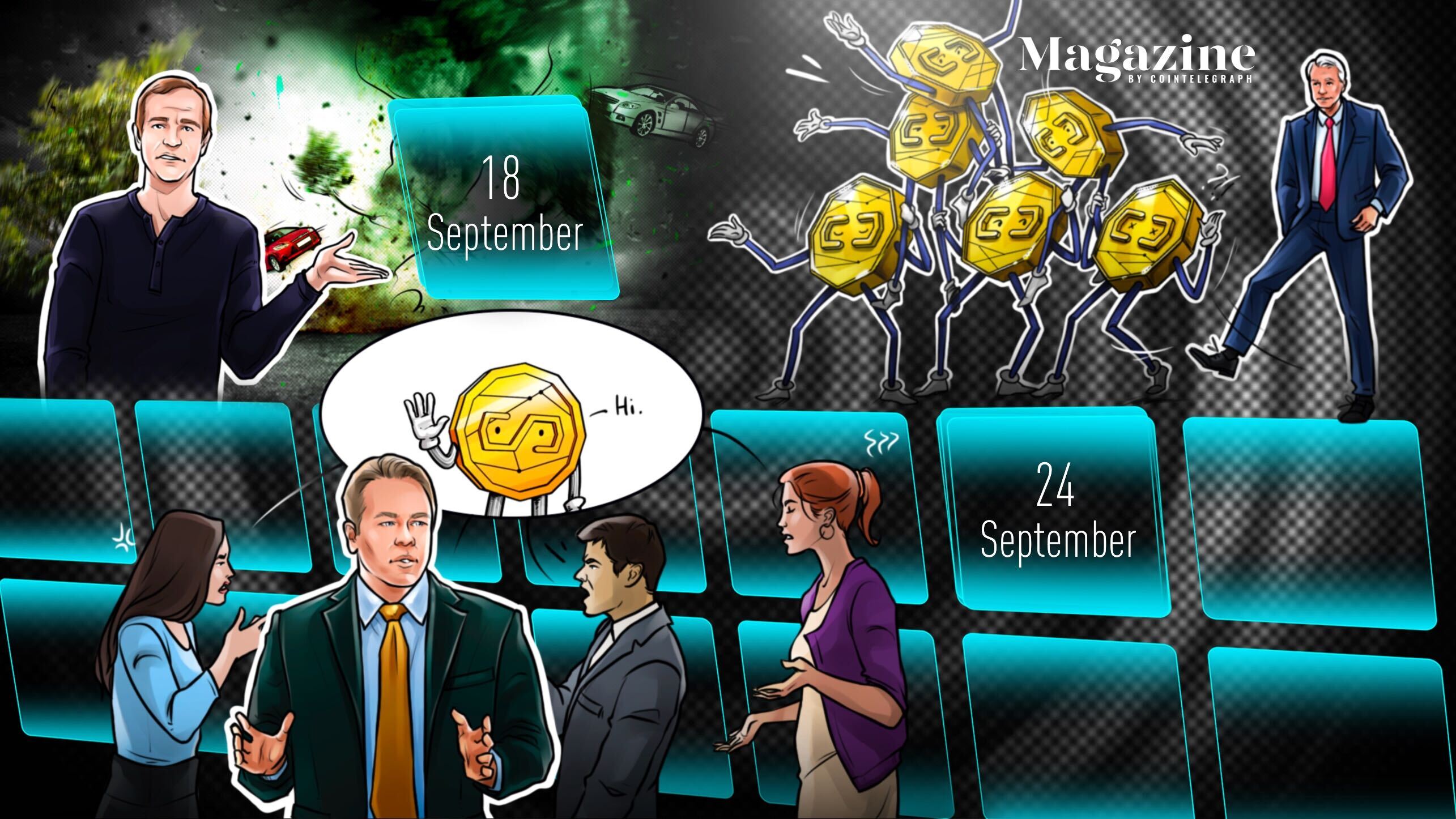 Coming every Saturday, Hodler’s Digest will help you track every single important news story that happened this week. The best (and worst) quotes, adoption and regulation highlights, leading coins, predictions and much more — a week on Cointelegraph in one link.

Kraken’s Jesse Powell will step down as CEO, stay on as board chair


After more than a decade heading up crypto exchange Kraken as CEO, Jesse Powell has decided to pass the torch to the company’s chief operating officer, Dave Ripley. Powell is not done with Kraken, however. He will become chair of the board for the organization. “It’s just gotten to be more draining on me, less fun,” Powell said, as quoted in by Bloomberg. Ripley joined Kraken as chief operating officer in 2016.


In line with other advances South Korea has taken to embrace the digital world, the country wants to create new laws regarding the Metaverse, according to plans from the Ministry of Science and ICT. The ministry wants proper laws in place for the Metaverse, but thinks it’s unwise to form-fit current regulations to new technology. Previous news saw South Korea invest $200 million toward metaverse development in the country.

A New York court has ordered that Tether provide proof that its USDT stablecoin is fully backed. The decision is part of a case involving iFinex, Tether’s parent company, which originated in 2019. The case against iFinex alleges that it used the unbacked USDT for crypto market manipulation. Two other U.S. authorities have requested proof of backing on previous occasions, with iFinex reportedly providing sufficient documentation.

As part of a case against crypto YouTuber Ian Balina, the United States Securities and Exchange Commission (SEC) recently claimed certain jurisdictional rights based on the high number of Ethereum nodes reportedly residing in the U.S. Although crypto is borderless by nature, the SEC, in this case, is trying to claim that transactions occurred within U.S. boundaries, which could bring certain laws into relevance. The claim is part of a broader case against Balina in which the commission alleges a failure of proper registration for a token sale he facilitated.

China accounts for 84% of all blockchain patent applications, but there’s a catch

Information from China’s Ministry of Industry and Information Technology detailed that 84% of the globe’s blockchain patent applications come from the country. President Xi Jinping stimulated patent activity when, in 2019, he expressed the need for China to focus on blockchain technology. China has only greenlit 19% of submitted blockchain patents, however. 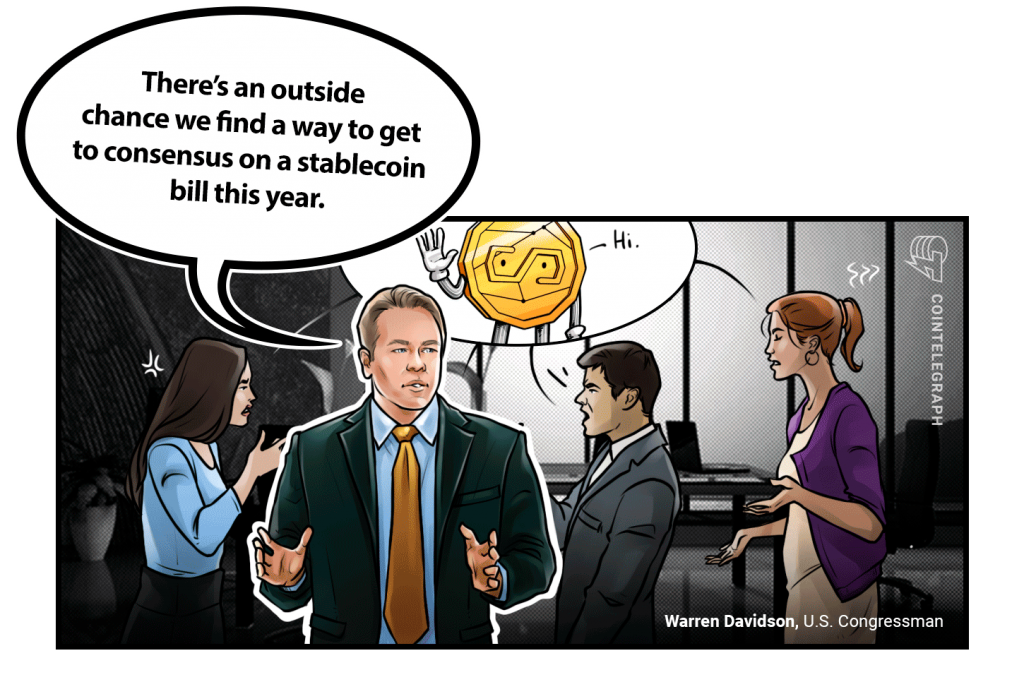 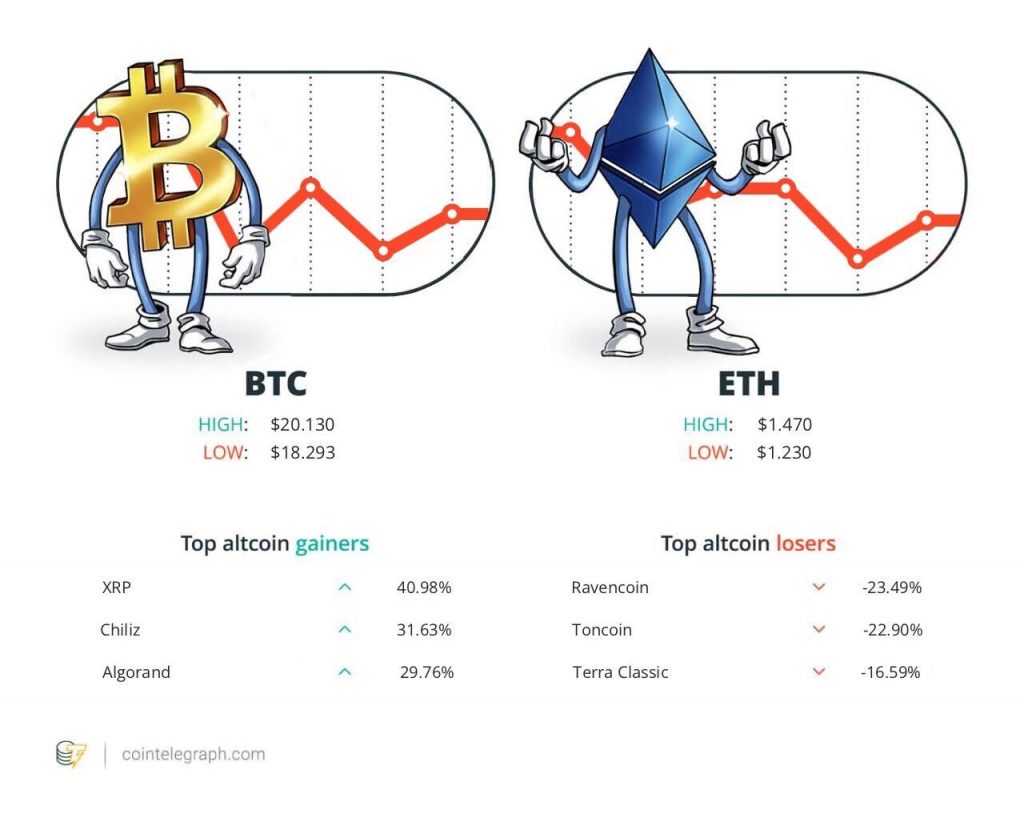 For more info on crypto prices, make sure to read Cointelegraph’s market analysis.

“Regulation is always a concern, but BTC is regulated.”

“How does a DAO really own the IP [intellectual property] of the protocol it is supposed to govern?”

“The government in India definitely doesn’t want crypto anymore. […] The government is outright saying, ‘We like blockchain but we don’t like cryptocurrency,’ but it’s kind of ridiculous.”

“Sharding is indeed one of the most effective and universal ways to solve the so-called ‘scalability trilemma.’”

“The concern is that if the Fed tightens too much, the U.S. economy may actually go into a severe recession.”

“Cryptocurrencies are volatile, but no middlemen are taking a hefty commission or scrutinizing your transactions.”

“There’s an outside chance we find a way to get to consensus on a stablecoin bill this year.”

“People are getting more cautious in the space and are not sure how to interact with Tornado Cash, we’ve seen deposits into services providing similar activity go down at least temporarily, because people are measuring like, ’What does this mean for me?’”

“I’m a major skeptic on crypto tokens, which you call currency, like Bitcoin. They are decentralized Ponzi schemes.”

Prediction of the Week

Bitcoin largely traded between $18,000 and $20,000 this week, according to Cointelegraph’s BTC price index. The number of Bitcoin long-term holders (LTHs) in the red currently lines up with previous bear market bottoms, suggesting that the digital asset may be in the process of bottoming out. Of Bitcoin’s long-term hodlers, about 30% sat in losses as of Sept. 22. Bitcoin’s 2020 and 2018 bottoms occurred when the percentage of LTHs in the red hit around 35% and 32%, respectively. A drop to between $10,000 and $14,000 could cause the LTH loss percentage to line up with previous bear markets.

FUD of the Week 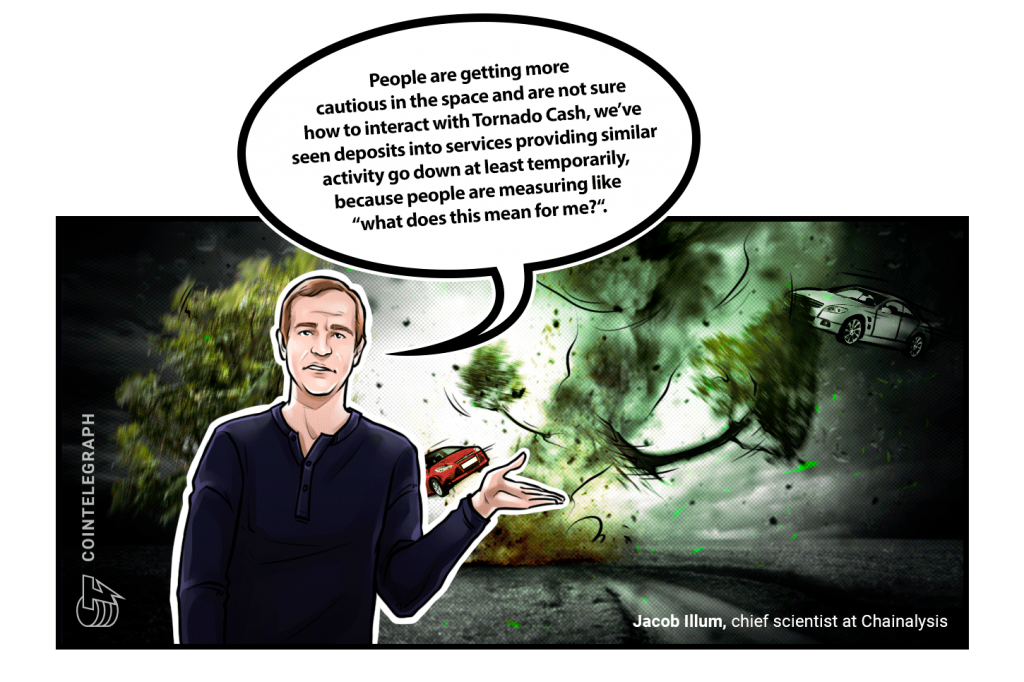 Decentralized finance operations under United Kingdom-based company Wintermute suffered an attack that cost the firm roughly $160 million. Wintermute CEO Evgeny Gaevoy noted the company has enough funds to withstand the loss without affecting customers. Gaevoy expressed willingness to classify the event as a white-hat hack — but only if the violator comes forward. Later reporting showed the attack was not a smart contract exploit as originally thought, but instead a private key issue, according to blockchain security firm CertiK.


Filing for Chapter 11 bankruptcy in Texas, Bitcoin mining hosting company Compute North is one of the latest crypto bear market casualties. However, the price of energy also weighed on the firm. The company reportedly has between $100 million and $500 million worth of assets, although its debts total roughly $500 million. Compute North partners Marathon Digital and Compass Mining should not see negative effects from the bankruptcy filing, according to comments from both companies, but additional updates may follow.

Bloomberg got its hands on a draft of a U.S. government bill that reportedly aims to prohibit new algorithmic stablecoin creation for two years. The text seemingly seeks to enforce a ban on new stablecoins that derive their pegs from other associated digital assets from the same creator, where redemptions can occur for a fixed price. Stablecoins currently fitting the bill’s description would have two years to alter their models. 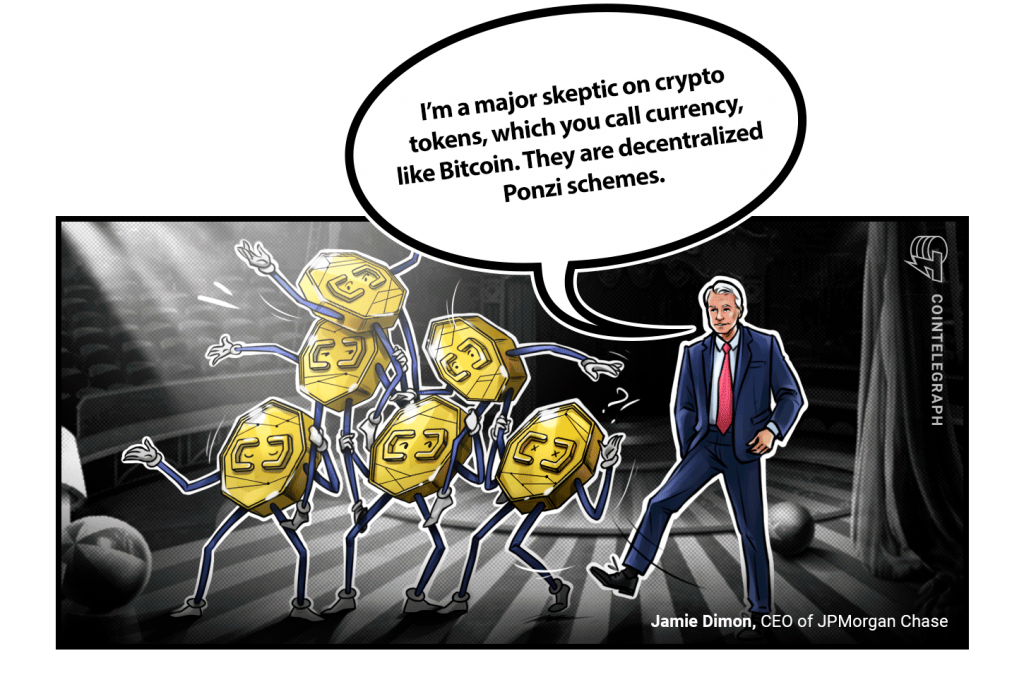 Saving the planet could be blockchain’s killer app

“Putting Paris Agreement carbon markets on Ethereum and connecting the national carbon accounts of the world, is blockchain’s killer app.”

Toss in your job and make $300K working for a DAO? Here’s how

“The collaboration-maxi nature was a welcome breath of fresh air.”

Global economic conditions suggest that markets — including the cryptocurrency market — have further downside ahead. Don’t bank on a surge to new all-time highs in the months ahead.

“When you’ve been in crypto long enough, everything is a chart.” 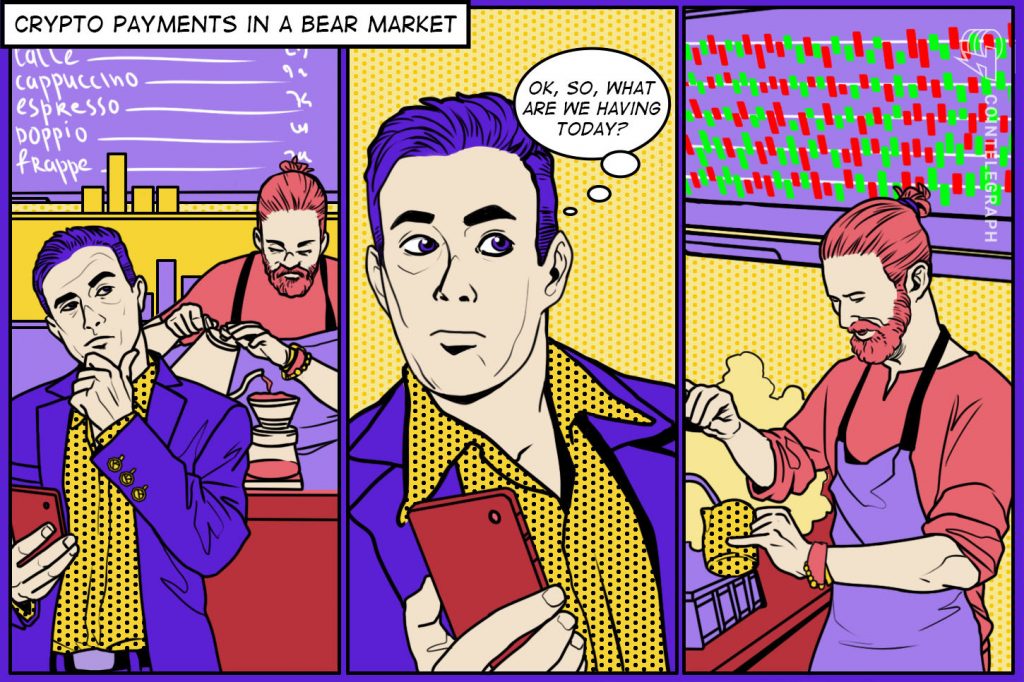 The best of blockchain, every Tuesday

Subscribe for thoughtful explorations and leisurely reads from Magazine.